Now that we have gotten our feet wet with the Champion Ladder data, it’s time to start looking at some actual match results.

We are going to start with Team Value because it’s an interesting mechanic in Blood Bowl that plays a number of complementary roles:

We will start relatively simply with a few exploratory graphs looking at TV progression within the CCL, before moving on to analysing the effect of TV on match outcomes. Finally, we will take a look at stadium enhancements – one of the unique features of Blood Bowl 2 – and try to figure out if you should bother with them.

In order to easily work with the data on a team-by-team basis, it is first necessary to modify the data from it’s current per-game structure:

Into something that records data per-team:

This lets us track the progression of a team, regardless of whether it was playing home or away.

Since the Champion Ladder seasons only run for about six weeks, it is worth looking at just how many games each team ends up playing, since that will affect the options for TV progression we will be looking at.

Most teams play very few games in the Champion Ladder. Of the 52,534 total teams that have played across the five seasons, almost half are one hit wonders and 80% have played five or fewer games. At the other end of the scale, there are four teams that have played over 100 games, which is an impressive feat to get through in such a short space of time. If the teams that only play a single game are excluded, the mean number of games per team is 6.75, so once a team gets going it is likely to have a reasonable number of games for us to look at.

For the teams that do get going, how does their TV tend to develop? We can explore this question by looking at a heatmap of TV against number of games played by a team. We will break this down by race since the races have different rates of skill and player gain and are therefore likely to have different TV profiles. 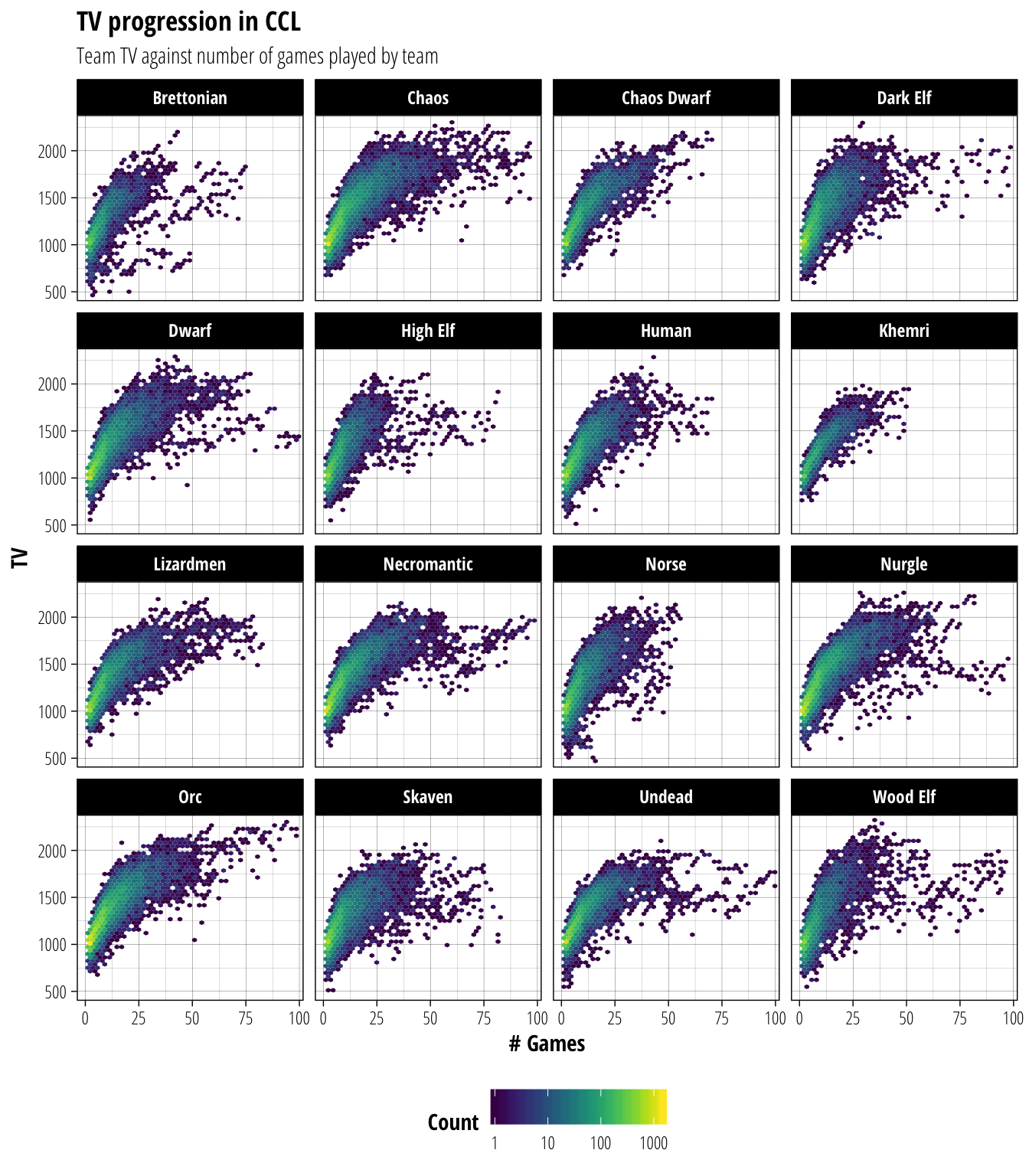 Looking at these heatmaps, the differences between the races are very subtle. Most races reach TV1500 by ~12–15 games, with only small differences between teams that develop quickly (eg. Dark Elf, Wood Elf) and those that develop slowly (eg. Lizardmen, Nurgle). The main difference between races is instead at what point they reach a plateau in TV development. Since so few teams play a large number of games in the Champion Ladder this plateau will be heavily dependent on the specific teams that play that long. However teams that are generally considered powerful at low TV (eg. Undead, Skaven) tend to plateau at a lower TV than teams that just get better the more skills they can take on (eg. Chaos, Orc).

Next, we will look at how the TV of a team changes after a match based on it’s starting TV. This may become useful later when we are considering enhancements to our TV-based prediction methods for simulating the results of a league season. 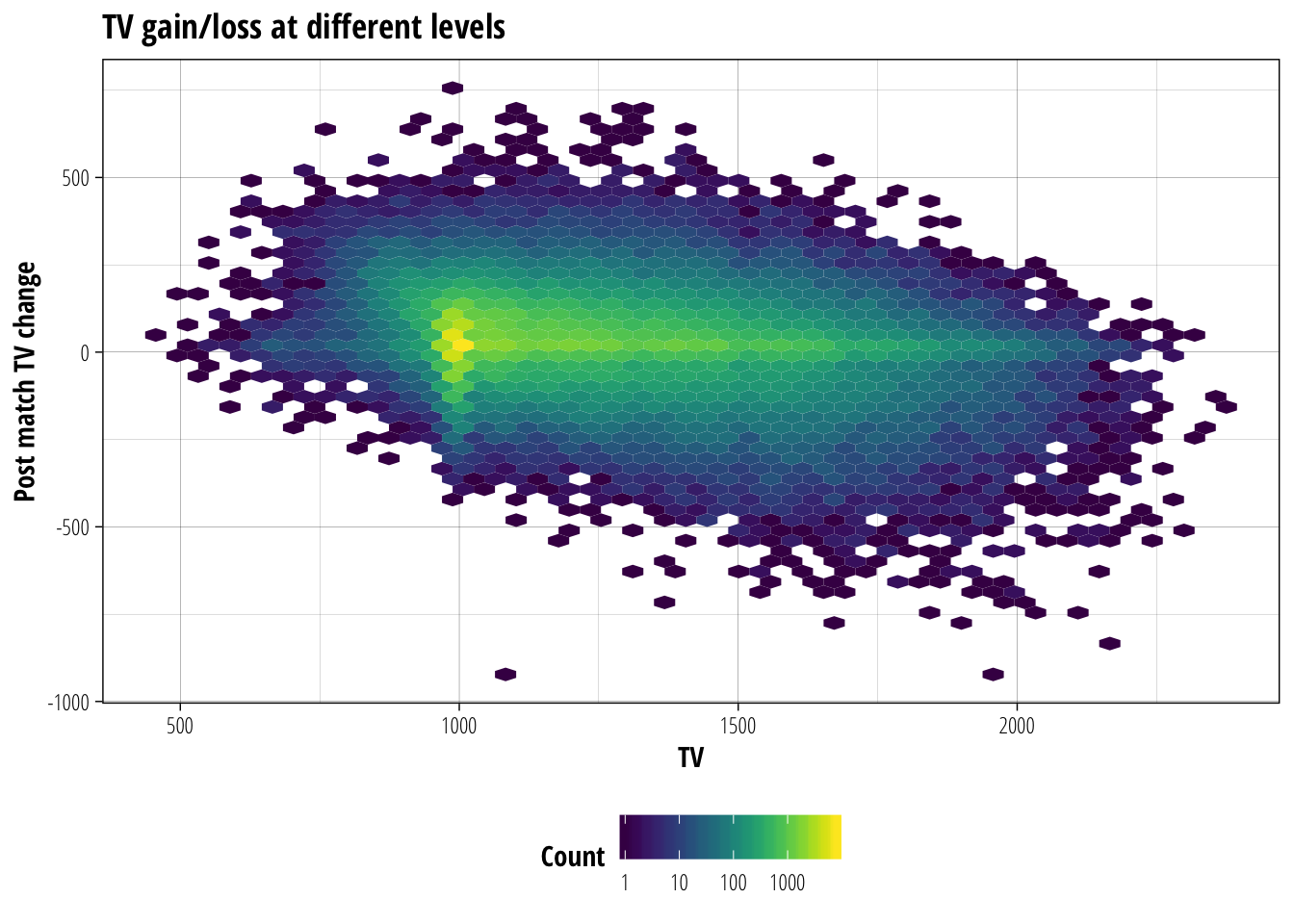 The two most obvious features of this figure are:

Ignoring these features, there appears to be an inverse linear relationship between TV and TV change. So as the TV of a team increases, you are increasingly likely to suffer a drop in TV after a game. This relationship makes sense because at higher TV most players will have several skills already, making it harder to gain extra skills. At the same time, these high-value players make perfect targets for player removal specialists and their loss can severely impact a team’s TV for the next game.

Now that we have some idea of how the TV of a team changes throughout a Champion Ladder season, let’s look at the role of TV as a balancing mechanic by considering the effect of TV difference on game outcomes. The matchmaking algorithm attempts to minimise the TV difference between matched teams, so we should first take a baseline look at how well it manages to achieve that.

The median outcome is obviously to have a perfectly matched game, with just under 10,000 games out of the 107,556 games in total. 50% of the matches fall within \(\pm\) 90TV, so without spending treasury cash most games will have no more than a Bloodweiser Babe as inducements. The majority of games (90%) fall between \(\pm\) 350 TV, which seems pretty reasonable considering how many Champion Ladder games get played in a day. Although ending up in that 5% tail of being down 500–350 TV is never a fun situation.

If TV-based inducements were a perfect balancing mechanic, we would see a 50% win rate regardless of the TV difference between two teams. There are obvious reasons why we do not expect it to be perfect, but how well do inducements make a fair match between mismatched teams?

Since it is reasonable to assume that concessions are more likely to occur in a heavily uneven matchup, we will look at game results as a function of TV difference both including and excluding games that resulted in concessions. 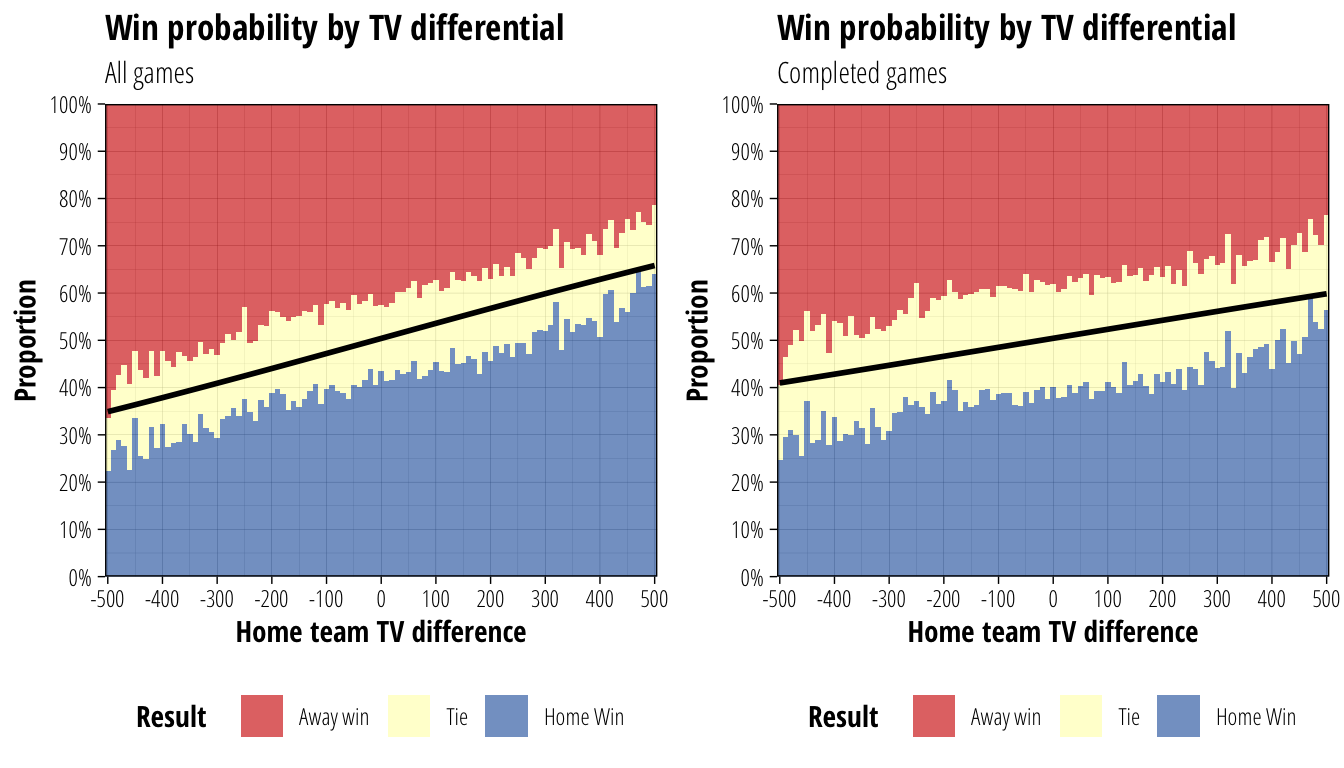 The black line shows the outcome of fitting a logistic regression to the data, which models log(\(\frac{\textit{prob. home win}}{\textit{prob. away win}}\)) as a function of TV difference. This regression indicates the expected value for the home team of the match where a win is worth 1 point, a tie \(\frac{1}{2}\) and a loss 0. This can effectively be thought of as the win probability of the home team if tied outcomes are ignored. The fact that the line on the right is much flatter than the left suggests our assumption about concessions being more likely in unbalanced matches is correct, so we will only consider completed games for the rest of the analysis.

What the right hand figure tells us is that inducements provide a reasonably good balancing mechanic. Differences in TV provide only marginal changes to win probability; even at the extremes a team with +500 TV will only win about 60% of games that aren’t tied.

Stadium enhancements are an interesting addition to the game, costing $100K (plus $100K upgrading the stadium to level 2) but not adding to a team’s TV. I assume the argument for why this is the case is that enhancements provide their benefit equally to each team, so shouldn’t affect the TV of the purchasing team. However, it’s pretty easy to imagine situations where one team gets much more value out of the enhancement than their opponent (Deathroller Dwarves with a free bribe, anyone?), and teams can be built to take advantage of having their home ground enhancement in ~50% of games they play. It is therefore worth considering what the true value of stadium enhancements are and if they make a difference to a team’s win rate.

Before answering that question, we should summarise what stadium enhancements are used by Champion Ladder teams to understand more specifically what we are measuring.

Because I understand things much better when there are pretty pictures let’s try a quick visual check to see if there is likely to be an effect we can detect. Taking the plot above, we will overlay a logistic regression fitted only with data from games containing a stadium enhancement in green. 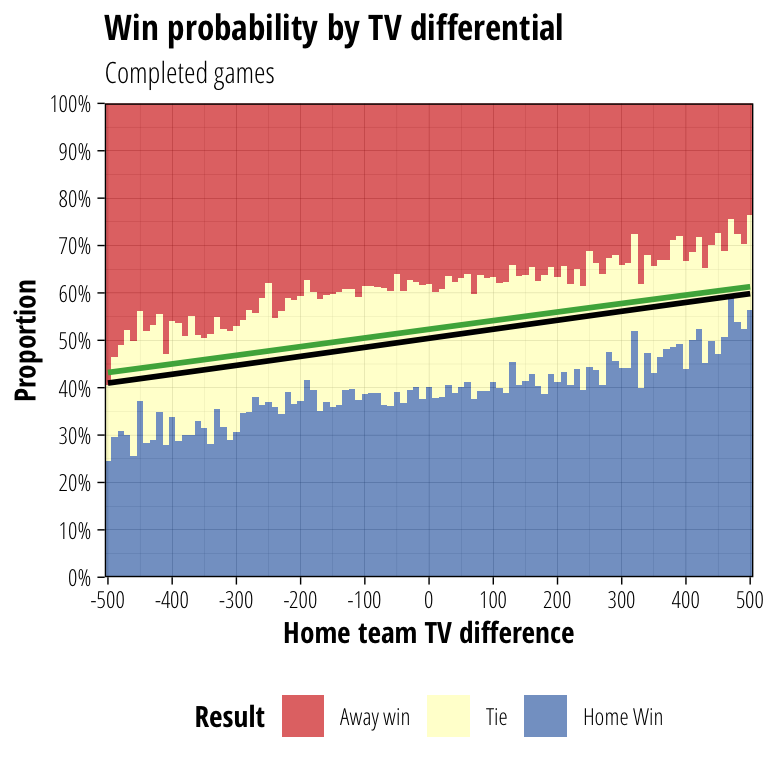 This crude approach does suggest that a stadium enhancement has an effect on win rates. Since the green line sits above the black line calculated from all games, stadium enhancements are associated with a slight increase in the home team’s chance of winning the game.

We can assess this more formally by fitting a logistic regression with both presence of a stadium enhancement and TV difference as independant variables.

The relevant parts of the regression summary can be found after the Coefficients: heading. Both the tv_diff and !is.na(structstadium)TRUE coefficients are statistically significant (p < 0.001), suggesting that TV difference and the presence of a stadium enhancement both contribute to the home team’s probability of winning.

The best way to explain what those coefficients mean for win probabilities is to show an example of the change in probabilities as either of the factors change. Since this is a logistic, rather than a linear regression, the precise contributions will be different at different points along the TV difference scale, however in our situation these differences are minimal and so a single example will be sufficient to show the relationship.

Getting more data from future seasons will help to narrow down the size of this effect, however to summarise the main conclusions from above: